Since the introduction of endovenous vein therapies EVT in 1998, various procedures for the removal of varicose veins have become established as equivalent forms of therapy to the classic procedures of crossectomy and stripping. The principle of the endovenous treatment methods is based on the fact that the diseased truncal veins (vena saphena magna or vena saphena parva) no longer have to be surgically removed but are “switched off” thermally or chemically. The sclerosed truncal vein is completely resorbed by the body’s own processes. An incision in the groin or the back of the knee is no longer necessary, so there is only slight bleeding, and thus a painless and shortened healing phase. Thermal procedures (often called “endovenous, thermal ablation of truncal veins”) are the ClosureFast procedure, laser therapy and the radiofrequency method. For some time now, VenaSeal, a special acrylic vein adhesive, has been offered as a further minimally invasive chemical treatment option.

Advantages of all endovenous therapies are:

Procedure of the intervention in 2 steps

Endovenous surgery is the first step of therapy. It is used to “switch off” the effected vein, i.e. to sclerotise it. However, this does not yet treat the diseased side branches of this truncal vein (these are the actual, visible varicose veins). In a second step, the affected lateral branches are removed piece by piece with the so-called phlebectomy. See also: How are varicose veins actually removed? Both steps of the therapy are carried out in the same session in the Vein Centre. Depending on the extent and number of the affected truncal veins, the duration of the entire procedure is between 1 – 2 hours. If both legs are affected, both legs are usually also treated in the same session at the Zurich Oberland Vein Centre.

Several studies have now shown that the results of endovenous therapies for treating varicose veins are equivalent to those of traditional surgical methods. However, the post-operative rehabilitation time and pain are significantly less.
Since 1 January 2016, compulsory health insurance has been reimbursing these new treatment methods (radiofrequency and laser procedures) by doctors who have an appropriate certificate of competence.  See notification of the Federal Office.

In Medtronic’s ClosureFast procedure (ClosureFast™ technology), a catheter is inserted into the diseased vein (magna or para saphenous vein), at the end of which a 7 cm long segment is selectively heated. The catheter is retracted in steps under ultrasound control. The vein closes as a result of the heat and is completely absorbed by the body within weeks to months.

An optical fibre is inserted into the diseased vein and advanced to the groin (vein saphena magna) or the back of the knee (vein saphena parva). The laser energy in the form of heat is released radially via the optical fibre during the continuous retraction. The effect of the heat causes the diseased vein to close. It is then broken down by the body’s own processes. While in the early days of this technology, the first optical fibres (bare fibres) still led to relatively frequent side effects, the rate of side effects has decreased significantly with the introduction of the radially emitting fibres. Biolitec is one of the leading suppliers with its ELVeS Radial Laser process.. 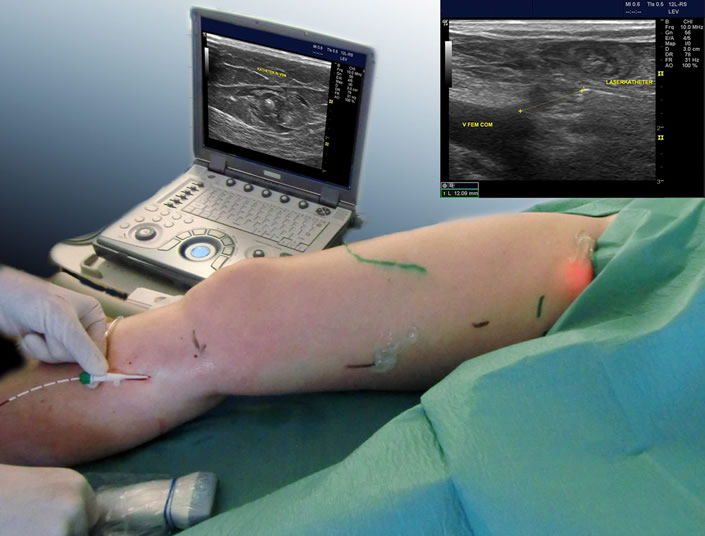 Since the 1980s, minimally invasive treatment methods using high-frequency electrical energy have been tested. In so-called endovenous radiofrequency therapy, heat is generated at the tip of a thin catheter by radio waves, which acts on the inner wall of the vein and leads to the closure of the diseased vein. The heat is thus generated by radiofrequency instead of by an electric heating element (ClosureFast) or laser light. In this procedure too, the doctor inserts the flexible catheter with the aid of an ultrasound image via a puncture in the leg and pushes it forward into the groin or the hollow of the knee. Once it has reached the diseased vein, heat is released via the upper end of the catheter. By slowly pulling back, the vein wall is heated and thus thermally damaged. This leads to the closure of the vein. The pathological backflow of blood is thus stopped. In the following weeks to months, the body breaks down the blocked vein.

For some time now VenaSeal from Medtronic Inc. (USA), a special acrylate vein adhesive, is another minimally invasive treatment option. In this method, a catheter is inserted into the vein under ultrasound control and the diseased truncal vein is permanently bonded with cynoacrylate tissue adhesive using a special applicator. However, only the diseased truncal vein can be treated with this method, not the diseased lateral branches (the actual varicose veins). These must be removed by phlebektomy (hook method) or foam sclerotherapy. For this phlebektomy, however, a local anaesthetic is still necessary. The intervention by means of VenaSeal is currently not paid for by health insurance companies.

Echotherapy combines high-intensity focused ultrasound (HIFU) for ablation of the lesion and conventional ultrasound imaging for target detection and monitoring. The heat is thus generated from outside the diseased truncal vein by focused ultrasound waves. However, the procedure is still in the development phase. The duration of the therapy is still too long and the side branches (the actual varicose veins) cannot be removed with it either. The Vein Centre is constantly monitoring the development of new forms of therapy.

As a result of the disease of the vena saphena magna (large rose vein) or vena saphena parva (small rose vein), the side branches of these veins also become diseased. These are then usually visible or palpable as winding vein strands on the lower and upper thigh and determine the severity of the clinical picture. The diseased lateral branches of the diseased truncal veins are the varicose veins, not the diseased truncal veins themselves. These varicose veins (the word varicose comes from crooked) are often the reason why patients consult a doctor. New varicose veins can also reappear after correctly performed operations. These branches are called relapses.

This procedure is usually carried out on an outpatient basis and under local anaesthesia, usually directly following the endovenous therapy. Small stab incisions of 1-2mm length are made above the marked veins. Using a special hook, the underlying veins can then be pulled out piece by piece. The length of the phlebectomy can vary greatly and ranges from 10 cm to 200 cm if both legs are affected. The more carefully the side branches are removed, the lower the risk of recurrence.

The best known therapy is the surgical removal of the diseased vein (crossectomy and stripping). However, it is increasingly being replaced by endovenous, outpatient therapies. In severe cases, however, there is still no alternative to classical surgery. The operation essentially consists of the following 3 steps: The classic operation is performed by Dr. Berwarth herself with an experienced assistant in the modern operating theatres of the Limmatklinik in Zurich. 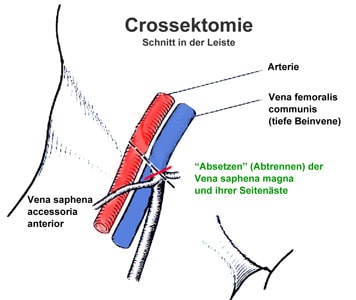 The principle of foam sclerotherapy is based on the fact that a sclerosing agent, which is foamed with air, damages the inner wall (intima) of the veins, which are then absorbed by the body over a period of weeks and months.

Procedure of the foam sclerotherapy

The sclerosing agent is injected into the diseased veins under ultrasound control. The procedure is painless. The therapy is particularly suitable for recurrent varicose veins – varicose veins that recur after some time despite treatment. However, it can also be used for truncal veins (VSM, VSP) or side branches in the initial therapy. Disadvantages of this therapy can be: